I'm writing this before one of our great American traditions with agricultural roots – Thanksgiving – originally a time to be thankful for the bounty of the harvest. The 2017 crop year harvest has been a surprise to many. How is it possible to produce so much with such adverse growing environments? Here are just two Iowa examples:

How is it possible that during the peak of vegetative growth, when the plant is demanding the most water, the corn plants can sill produce so much with so little rainfall?

Likewise, how is it possible to produce an average of 252 bu/ac with 22 inches of rain in April through July in central Indiana – when it never stops raining, fields are water logged and there are virtually no good days to do field operations?

I'd like to take this time to make a point about how amazing our modern corn production is and can be and to share some thoughts on why we grow corn.

Borrowing from a Tamar Haspel's Washington Post column from a few years ago, titled "In defense of corn, the world's most important food crop". In her column, she converts corn yields to calories/acre. Seems to me that if we're serious about feeding the world, calculations like this matter. 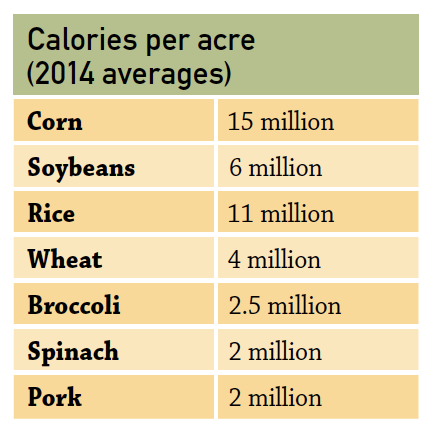 Doing the math for these real world, non-contest examples above – their bushel per acre yields convert to over 21 million calories produced per acre. The Post column provides the scientific explanation as to why corn is so much more efficient (3x) at converting sunlight – through photosynthesis into calories.

Every measure of efficiency related to corn production is in need of constant updating. One of the original attacks on corn-based ethanol used 130 lbs. of nitrogen per acre to produce 130 bushels per acre to do the net energy calculation. We have customers that frequently produce over 200 bushels per acre using only 0.6 lbs. of nitrogen per bushel. Agriculture is frequently attacked for using too much water and corn is one of the crops that is cited. But lost in those debates is that 80% of the U.S. corn and soybean crop is rain-fed, not irrigated. The water we are using to produce most of our corn and soybean crop isn't an either/or proposition. It's not, either agriculture uses it or Los Angeles does. We use a fraction of the rain water that feeds our crops and leave most of the biomass produced in the field to recycle carbon and nutrients.

We have serious environmental and public policy issues that we have to continue to address but data from fields like yours shows constant improvement and efficiency. I get the luxury of seeing real world data that tells the story of an ever increasingly efficient production system. Every year, we not only produce more yield per acre but we squeeze more bushels from every pound of applied nutrients and more bushels per inch of rainfall!