"With alternative things like fungicide, you definitely want to see if that's paying for itself. Historically, the InSiteCDM program is showing every year that it pays for itself. With that knowledge, it makes you more willing to spend the money to put on a fungicide. You wonder, should I or shouldn't I do it? But when you look at the data, you'll know if it works." - Shaun Wolf, 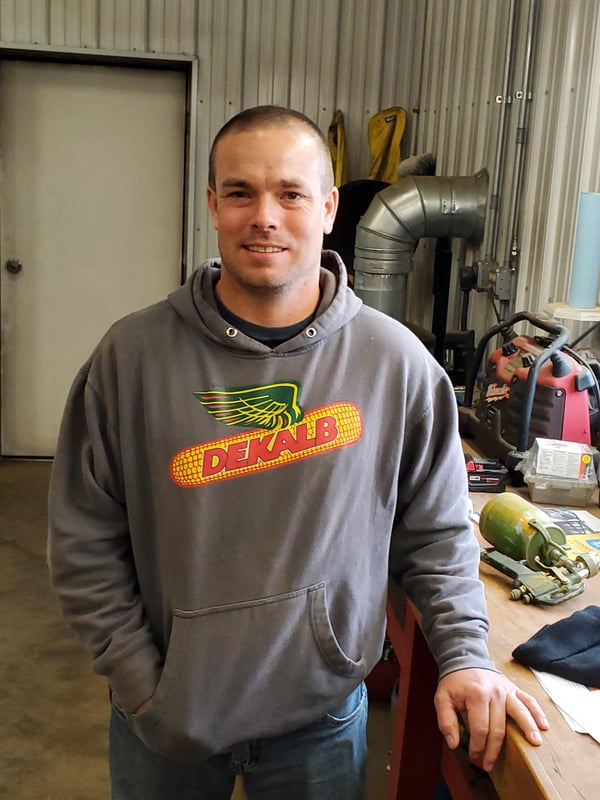 In a recent podcast episode our guest speaker Pat Mai, from our Partner InSiteCDM, interviewed grower Shaun Wolf who farms in northwest, IA.

PAT MAI: Pat Mai is an InSite CDM Account Manager for Ag Partners. I am in charge of the western territory of Ag Partners. I mainly do CDM management. I help set up zones. I help make recommendations for seed and fertility, according to those zones. I query data for guys who have questions that are in the program.

SHAUN WOLF: I’m Shaun Wolf. I farm in Northwest Iowa. Last fall, Pat approached me to sign up for the program, and we signed up. It's the first year and, so far, it's going well.

PAT MAI: Shaun, what are some of the benefits of recording in-season application?

SHAUN WOLF: Certain products and practices perform better than others. If you have any crop injury, you have everything documented in your records. It helps me remember, all season long, what has been done come fall. Everything you've done all season long is documented and easy to access.

PAT MAI: What do you think of the use of precision ag as a service?

SHAUN WOLF: It helps me determine how much I can put into my inputs while getting the best return on investments. They have a program to take all your production data in one area and tailor a program suited for you, instead of taking broad data from around the country and trying to apply it to your farm.

PAT MAI: You get some local answers instead of out-of-state stuff. Well, Shaun, how does farm analytics help you identify problem areas and improve them?

SHAUN WOLF: They help break down your operation farm by farm. They help find problem areas and resolve issues. If you have consistent low-yielding areas, they help determine the cause and hopefully improve it. If you can't improve it, you can put that area in a CRP or lower your populations to get your best return on it.

PAT MAI: Or you can take your above average ground and push that harder to improve that. It doesn't necessarily have to be your worst ground. We've been doing some ELBs (Enhanced Learning Blocks) and running some NexGen recommendations for nitrogen. Where do you think that can take us in the future?

SHAUN WOLF: You can measure how hard to push populations in your A zones and how far you can drop your population in your poor zones before you see a yield reduction. It’s just trying to maximize each acre and get the full potential out of it.

PAT MAI: With these new hybrids coming out, we can learn where the right population is for each zone, with your ELBs.

SHAUN WOLF: Right. And you can place certain hybrids in different areas to perform better.

PAT MAI: How do you think agricultural technology can make your farm more efficient?

SHAUN WOLF: It reduces the chance of skips in the field. Pat showed me he hasn’t skipped when he’s planting. There’s less time spent in the field, which saves fuel and labor fatigue. You can produce more while using less inputs and improving your yields. It just all around makes your operation more efficient.

PAT MAI: What have you learned from precision ag and how has it benefited your farm profit?

PAT MAI: How do you work with your advisor to develop a crop plan?

SHAUN WOLF: First, we give all our yield history to create zones. And then from that, we create our planting population maps, rate maps and fertilizer recs.

PAT MAI: Yeah, I took your zones, made them and brought them back to you. Then you tweaked them and told me if I was right or wrong.

SHAUN WOLF: Well, as the farmer, we know our ground better than, let's say, Pat. He just comes and sees what’s on the computer. But we're out farming the ground every year. So we know the farms. We might have a better understanding of what's doing what, if it's a wet spot or a sandy area.

PAT MAI: It could have been a hybrid failure one year or green snap.

SHAUN WOLF: Yep. So, yield data doesn't necessarily tell you everything. It gives you a broad idea, but it may not be accurate every year, if you had an issue. And that's what helps. Instead of just saying, here's your recs and good luck, we can work with them and tailor it to what you think is best.

PAT MAI: We don't have to waste one year of trial and error learning the ground. Since his grandpa's been farming and his dad and now him, there are 70 years of knowledge there. Let’s utilize it.

SHAUN WOLF: When Pat and Clint approached me, it just made sense. We've had all this yield data compiled and nowhere to go with it. With data, if you don't have a place to utilize it and put it to work for you, there’s really no point in having it. Doing a soil test, we're operating our fertilizer, but we haven't yet railroaded too much with our planting. But I think this will really take it to the next level. Especially with this farm economy the way it is, you need to be as efficient as possible. Then also with our cost tracking, worked out farm by farm, you get a better understanding of where you’re at for break-even to get the best return on investment. You can't afford to be losing money where things are now.

PAT MAI: We ran some cost tracking modeling on a couple of his fields to see if it was beneficial to keep the rotation or switch to a corn-on-corn rotation. Just with the pricing and marketing of it, that’s an added benefit to help make those decisions before you actually get it into the ground.

SHAUN WOLF: At the time, it probably was wise to do corn-on-corn. But then, obviously, this COVID-19 came and things changed again. It's an ever-changing market. I do all our own spraying and, so when I’m spraying herbicide and fungicide, it's all documented: day, time, temperature, wind speed. I really didn’t do anything with it. I just had it for my record keeping. Obviously, the fungicide and herbicide will probably overlay with our harvest maps and see if there was a response. If we didn't leave some strips, maybe we compare herbicide-wise. If there’s a crop injury, we have it documented. If things didn't perform like they were supposed to, you have it documented. With your alternative things like fungicide, you definitely want to see if that's paying for itself. Obviously, every season’s going to be different but, historically, the InSite CDM program is showing every year that it pays for itself. So, with that knowledge, it makes you more willing to spend the money to put a fungicide on. You wonder, should I do it or shouldn't do it? But then you pass it up and lose out on yield.

PAT MAI: And you're trying other types of fungicides or other trials with other companies that were recording. We can do validation reports on it to help verify that it's working. If you're splitting a 40-acre field and doing half and half, or doing certain seed treatments or graphite on seed, it helps keep that all straight and documented to actually see if it's working and paying.

SHAUN WOLF: Yeah, I'm doing a Compass Minerals trial. They have a seed treatment. It’s basically a talc you throw in the planter. Nothing real crazy about it. You just treat it as you normally would for your talc or graphite. And then, in-season with the herbicide pass, there's a foliar treatment to put in. And then, late-season, we put a fungicide on the corn ground. Another foliar treatment is put on, and it's all on the same acres.

PAT MAI: We're running it through CDM, and we can kick out a validate report. And it'll break it up by soil type, fertility levels, which hybrid it is. I mean, it gives you a base of data underneath to see if it is that stuff or what's actually helping it. With the plan, we'll just watch what we did this year, what we learned from it and if we like it. And then, going forward, we really won't know a whole lot until harvest rolls around and we see the results, or the answers, of what we did this year before we can go ahead and make a plan for 2021. We’ll look at the group data and see if what happened on his farms is an anomaly. If everyone had just as good of luck with certain hybrids, speed the process up instead of planting the same hybrid for three years and seeing if that’s the right one for us. So, we can look at everybody else’s data, also, and either not plant it again or try it again. To make a plan, we have to see how this year goes first.

SHAUN WOLF: You basically looked at your yields, and it helped determine if, next year, we're not going to plant this hybrid because it didn’t do well. Or, next year, we're going to plant more of this hybrid because it did do better. But, as far as changing our program, it really didn't do anything because it couldn’t put the data in and change it for you. And so that's why we were really more interested in signing up, to just have one place to put your data and get some results and be able to change things. I’ve known Pat for a long time, and he already knows the history of our farm. So, that helped a lot. Last fall, I wanted recs made and I think, within 24 hours, Pat had them to me. It was quick, with good answers. Pat’s always there, and if he doesn't have the answer, he'll try and find it. So, it's been nice to have somebody to lean on and get the answers, instead of just guessing.

PAT MAI: You got to see a presentation of everybody's data then, for 2019, which brought back a lot more questions for me and helped query a lot of data he was thinking about.

PAT MAI: It gives you more concrete evidence of why we're making these decisions. It's not just me pulling it out of the sky, thinking you should just try this. I can give him a good answer with data to prove it to him. And it helps him sleep at night, just knowing that there is something backing it, not just willy-nilly.

SHAUN WOLF: You feel a lot better having it and not worrying about it.

PAT MAI: Thank you for taking the time for this podcast. Are there any other closing remarks? We appreciate your business.

SHAUN WOLF: I appreciate you. If I have a question, you’re there with an answer. And as we go forward, we’ll rock this operation.