Yield Efficiency at a Year-End Grower Meeting with SciMax Solutions

"I think people are really good looking at a 10,000-foot view, but when you dive deeper into the economics and profitability, that's where the rubber meets the road."
- Landon Aldinger, Farmer, Iowa Falls, IA

PETER BIXEL: Good afternoon. My name is Peter Bixel with SciMax Solutions, and today we're north of Iowa Falls and visiting with a client of ours, Landon Aldinger.

LANDON ALDINGER: Hello. This is Landon Aldinger. I farm around the Iowa Falls area with my father Mike Aldinger. I am a fourth-generation farmer in our family. We currently run a row crop operation. We have some beef cattle, some hog operations and also have a sales and consulting business here in town called Precision Farm Management.

KATIE DECKER: Tell me a little bit about how you got started with SciMax and why you started working with Peter.

LANDON ALDINGER: Yeah, so I would have met Peter through my father, who, I believe, the connection point was through Latham, correct? Yeah, Latham Hi-Tech Seeds offered a service that was called seed to soil. My brother-in-law Randy and myself and my dad and my dad's Latham RSM kind of introduced us. Dad was actively working with SciMax at the time through Latham, like I said, but we've kind of grown our relationship together over the years, adding various products.

KATIE DECKER: Do you still farm with your father?

LANDON ALDINGER: Yeah. We have a full corn and soybean farm. We have a few fat cattle here up at my place. We own some hog buildings that we do odds and ends with. And then we have a sales and consulting business, where we sell a full retail line of herbicides, fungicides, insecticides, any crop protection products, and then also sell Latham Hi-Tech Seeds and Wyffels Hybrids. 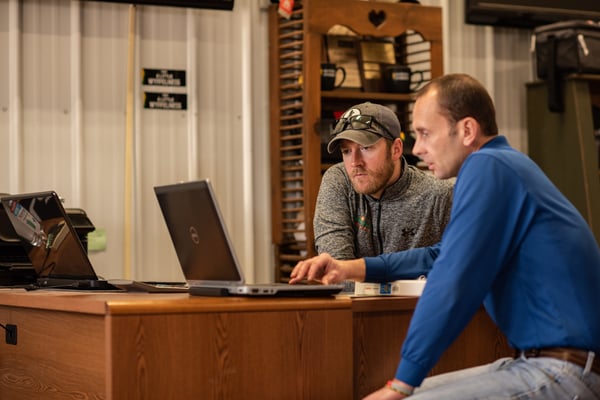 KATIE DECKER: Talk through how you guys work together.

LANDON ALDINGER: I call Peter and then he doesn't call me back. No, I'm just kidding. I'm kidding.

PETER BIXEL: It was that way.

LANDON ALDINGER: No, it's the other way around, usually. I use all the folks at SciMax to assist in creating that crop plan for the year, obviously. Planning from seed placement, a variable-rate nitrogen piece, our variable-rate seeding rates, just pulling all that data together and maximizing our potential profitability and efficiencies. Then, we get to this time of year, where we're looking backwards and kind of addressing: “How did we do in analyzing that?” The analytical side is why I enjoy the relationship. It's easy to go out and just pick corn and say: “I got 200 bushel, or whatever you got, and that's great.” But what did you do to dictate that outcome?

KATIE DECKER: Do you have an instance of a problem you guys were faced with, and then once you started working with SciMax, how they helped you overcome that?

PETER BIXEL: They had a fertilizer plant, so their fertility levels were really good. As they've been pulling off more yield, it just helps Landon now that we've been watching the fertility levels by the yield that they've been achieving and just being cognizant of what those levels are and how to address them, using the tools to basically fix or continue to keep them where t

hey're at. They've done a lot of litter. A lot of chicken litter too, as well, to help source a lot of that stuff, and then the hog manure that Landon mentioned. So I'd say just really concentrate on those fertility levels to make sure to keep them up because that's the thing that I think helped Landon’s grandpa, dad and then him, just having that good base. That foundation has really helped set the operation up for success.

KATIE DECKER: How does SciMax really help you get the most out of the data that you're collecting?

LANDON ALDINGER: Like I said, I think in any system there isn't always just one variable for success that you can tweak or fine-tune. It's taking a part of the entire system, what your manure management practices are, what your fertility levels are that he's talking about, how you're placing the seed, where you're placing the seed at what rates. Same with nitrogen. And I think the ability to dive into each one of those segments of that system and analyze this worked with this other combination but didn't work so well over here, you almost get a blueprint for going forward. I think, as we've seen hybrids evolve or their genetics evolve over time, we can really start to tailor-make it to the hybrids. That’s where I see the biggest focus for me, I guess, being a seed dealer, and I carry that onto my customers, too.

PETER BIXEL: Yeah, I think that’s helped Landon, knowing his hybrids inside and then just kind of putting out the practice on his own acres and then seeing: “Okay, if we push it to 38 or 40,000 or something, does it pay?” Maybe it doesn't because, again, back to the good fertility, everything else is set. So, now if you change that one variable, did it pay? And he can take that to others to help their operation if they’re similar.

LANDON ALDINGER: Or a combination of variables, too. Sometimes that data gets lost in the noise, and it's hard to kind of separate it out and see. So, I think their services have helped us that way immensely.

PETER BIXEL: This year has just been a challenge because you don’t have Ethan and Tyson going through, each one of them, individually. Two people at Premier go through it all, and I know they have a lot. They go through each one, verify and then, if there's a question, they send it to their in-house statistician. Then, they send those out, so it's been taking like a month to get those reports back.

LANDON ALDINGER: Yeah. Well, there's a lot of stuff in there.

PETER BIXEL: Yeah, we just did it on population this year. That’s all that we looked at. We had two farms. Leto’s and Bradford, I think, were the two that we did.

KATIE DECKER: Can we talk a little bit more? Just go a little deeper into the decision making. How is Peter helping you make those decisions, both agronomically and economically, on your operation?

LANDON ALDINGER: I come from an angle of the seed perspective, being a seed salesman. I want to know everything I can about every hybrid and where it likes to live and how it likes to operate. We've done a lot. I think, probably, the bulk of the work that we've done with you is the variable-rate planting populations; that and the nitrogen piece for ourselves and customers. I mean, how many times do I call you and just on random stuff, too?

PETER BIXEL: Well, yeah, it's not necessarily just about, I mean, from fungicide recommendations to product things. I don't know. I'm just thinking out loud here, but just anything in general. What do I use in my operation? I'll tell him what I use, but it doesn't mean he has to or, by any means, needs to. It’s just good, I think. It's the same way back from him to me, not just me to him. It’s just a sound barrier or somebody to talk through things with and see if your plan or if your strategy makes sense.

LANDON ALDINGER: I think maybe more than one key aspect of that data-driven decision is just forcing operators to think in those terms: doing trials and setting them up and comparing products. I'm looking at two fungicides right behind you, and we had head-to-heads out there, and we learned. I mean, we're going to look at the data, but I can look at it just visually and see that there was a difference. I think people are really good at just doing the visual 10,000-foot view, but you really have to dive into it and then start doing the whole, from the economics and the profitability side, which is where it really comes down to rubber meets the road.

KATIE DECKER: Can you tell me a little bit more about the trials that you've been doing? You don't have to give me any specifics on certain products or varieties or anything, but maybe why you decided to do the trial and some things that you've learned.

LANDON ALDINGER: I'm just thinking in terms of this last year because we probably had a little bit more, but there's always the fungicide head-to-head. There are always new products, comparing them to old standards and then running the cost analysis of how they compare versus yield. Standard stuff. Varieties. We do a lot of head-to-head populations within those varieties. At Leto’s, we had the high-yielding stuff. 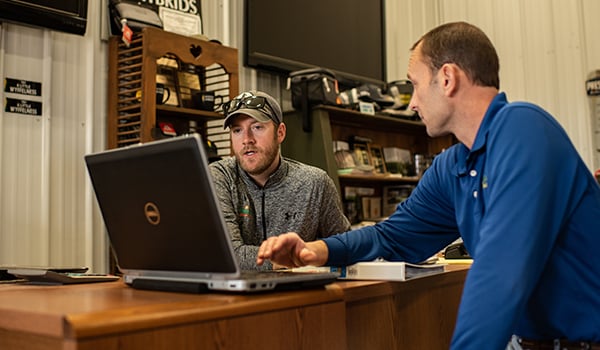 PETER BIXEL: Landon was tissue sampling every week and then, basically, had a plan put together of what to apply and when. It's different from what he was doing on other acres to see if he could push it or what we'd see.

KATIE DECKER: What do you think is the value of working with Peter and SciMax, in general? Why would you work with them over a competitor or someone else?

LANDON ALDINGER: Right now, I would put it mainly on trust. We talk, probably, I don't even know how often but quite often. He's just a trusted advisor, and I don't really like that term, but it is. I know I'm getting the honest truth when I call him and he gives me his recommendation. And if it's something different than what I see, then we try to dive into: “Why are my results different than what your results are?” But I think there's just a trust factor right now, and that's why we've continued to partner with them for the long term.

Please subscribe, rate and review this podcast so we can continue to provide the best precision ag and analytic results for you.