As a grower, you’ve most likely asked yourself, “How do I improve my operation’s performance?” Defining success is an important first step towards improving performance on your operation. However, the definition of success has evolved over time.

In general, growers understand that in order to drive higher profitability, they need to drive higher yields. Higher yields are key because row-crop farming is a high fixed-cost business. Before you plant a crop, most of your machinery investment is locked in. Land cost, whether you own it or rent it, is by far the biggest fixed cost. Whether you produce 100-bushel corn or 200-bushel corn, or 50-bushel wheat or 80-bushel wheat, it doesn't matter. You’re still left with many fixed costs. Producing more bushels is the only way to drive your cost down. Because of this, yield has become the surrogate for profitability.

We know better, though. We know that all yield isn't created equal. Farming isn’t all about yield, it’s about how efficiently we produce it. It's how many dollars we’re able to return to land and management.

I was speaking with a friend who is a professor in agriculture. He told me, “Real-world agronomy isn't rocket science. It's way more complex than rocket science.” His point is, we put someone on the moon with what would be the equivalent of a PC, or a laptop now. Real-world agronomy is super complex because it's this interaction of all kinds of different biological factors, including the weather, soils, fertility, seeds, and genetics.

The reason we make the agronomic decisions we do is because we understand there's an economic impact to them. We argue that agronomic-economic complexity is very spatial, meaning it's changing within fields. There are parts of fields that are begging to be managed at a higher level, while there are some parts of fields telling us we need to quit wasting money there.

We have this division happening between different ag technology start-ups. We have precision ag, which is more agronomy focused, and we have farm management information systems, which are arguably more economic focused. Growers are having to choose between 1. Am I going to focus on subfield agronomy? Or 2. Am I going to focus on field-level economics? Of course, our answer is that you don't have to choose. That's what we're about; combining those pieces together. Our solution is not one or the other, it's both.

At Premier Crop, we've been doing this a long time, and I'm convinced the reason every grower doesn't do what we do is because of the precision aspect. No one else has shown the grower year after year that this type of management pays. If we advocate or advise the grower to spend more money in the best part of the field, at the end of the year, we’re not having a “trust me” it works conversation. We're providing the dollars-and-cents analysis to show that they saw a higher return. A lot of times, they're spending 30 to 50 dollars an acre more on inputs in the best part of the field, but also generating an additional 80-dollar return to land and management beyond that input spend. 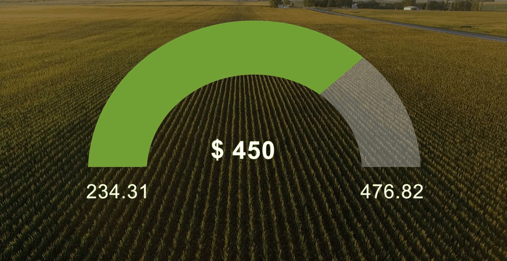 There is no doubt we need to continue to push higher yields. The times right now demand that growers scrutinize every dollar spent to get a higher return. It’s imperative that we be keen on how we spend every input and every input dollar to get that higher return. You may cut costs in some parts of fields, but we can’t always promise that you're not going to spend whatever you save. Sometimes you’re going to spend extra in the best part of the field. The point is, we have the ability to prove and deliver a report card on every field that says it paid better than if we had flat-rated it and pretended it was all the same.

We talk about having 400 layers of data at a subfield level, and people just think we're crazy for handling the complexity of all those data layers. There are so many things that change within fields, though, so what matters varies within different parts of the field. In our case, we have a lot of spatial soil sampling. Instead of just doing one sample that represents the entire field, we’re capturing differences such as organic matter, pH, and fertility. There could be a couple dozen layers captured that way. We capture as-applied fertility, which is more complex than people think because there are growers who would apply nitrogen in five different ways. We capture rate, source and cost, so those are all sortable data layers that can be analyzed. We have around 15 layers from the planting file:  population, density, seeds, and hybrid and variety are just a few. There are hundreds of layers that aren't necessarily captured on a monitor, but they still really matter. Manure is a great example of this. There are still many manure applications that have a huge impact, both agronomically and economically, and they're not always captured on a monitor. There's also input capturing the real cost associated with all this. It’s quite a bit of detail, but do this because it’s the most meaningful.

Things you measure tend to improve. So, if you don't measure it, does it have any chance of improving? It goes back to being intentional and having a goal. That's what we do with growers we’re working with. Every year, there's a goal-setting discussion about how we are going to measure success. Some growers want to drive yield efficiency. They want to drive higher returns, so that they can hire some help and their family life can improve. They can have more time with the family because they're able to afford hired labor. Others want to expand their operation. Everybody's got slightly different goals, but usually, it comes down to the fact that they're business people, and they want to generate more returns or hold their operating capital in check.

The reality is, the definition of success is different for everyone, but profitability matters. Having a business, whether it's farming or anything else, everybody's trying to make some money. Measuring the right parts to drive operational growth and profitable growth is so important.

Get in touch with a Premier Crop Advisor here to get started making data driven decisions today.